Maps and images can provide an immense amount of historical information, from property boundaries and place names to land ownership and “improvements” such as houses, barns, and fences. Settlement patterns, roadways, and other forms of communication and travel, and the characteristic signs of evolving communities like churches, schoolhouses, and burying grounds are often recorded on maps and captured in sketches and photographic images. While Long Island was mapped by cartographers beginning in the early 17th century, Southampton was not formally surveyed until 1797, when each town was ordered to do so by an act of the New York State Legislature. 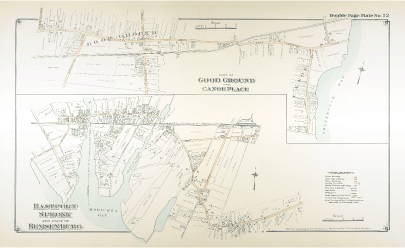 In the early 20th century, tax and assessor’s maps first appeared and these, notably those of the Sanborn Map Publishing Company, contain an astonishing amount of detail. At about this time historians began to produce maps that attempted to recreate patterns of early settlement based on their research. William S. Pelletreau, a former town clerk and noted Long Island historian, and William Donaldson Halsey, a local historian, made important contributions to this effort.

Reproduced here is a selection of Southampton Town maps. Researchers are encouraged to consult the "Resources” page for the location of other maps and images.

The Beers family (Fredrick, Silas, James, and Daniel) were prominent map publishers, working from the 1850s until the end of the 1800s. Sometimes publishing under the name of Warner & Beers, the combined firms produced a series of important state and county atlases and maps of much of the northeastern United States. Many of their regional maps are among the most detailed maps ever produced of their respective regions.

Because the Beers county maps are often detailed down to individual homes and landowners, they are highly sought after by general and family historians alike. The Beers firm produced their first comprehensive Atlas of Long Island in 1894; it was followed by an Atlas of Suffolk County published in 1894. Pictured here are plates from the 1894 map (with permission from the Southampton Historical Museum).

E. Belcher Hyde, Inc., created maps primarily for the fire insurance industry beginning in the 1890s. While much of their work was concentrated in urban areas such as metropolitan New York, the company mapped Suffolk County, Long Island, at least twice: in 1906 and 1915-16.

The Hyde maps primarily enabled insurance companies to estimate the liability of certain properties because they showed individual structures in densely settled areas as well as building materials, uses, land owners, and other pertinent information. The maps are also invaluable research tools because of their detail and accuracy. Researchers use them to examine the development of an area.