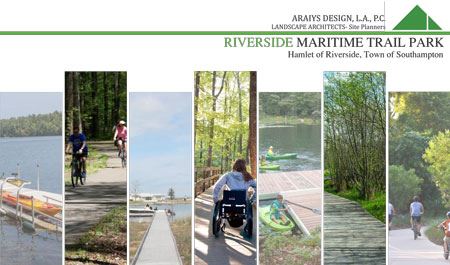 Development of the Riverside Maritime Trail Park with pedestrian access to the Peconic River, passive recreation and shoreline/wetland restoration, was a cornerstone feature of the Riverside Revitalization Action Plan (RRAP) and the Riverside Brownfield Opportunity Area (BOA) Plan.  The Park will facilitate a re-orientation of land use and community life toward the River, providing a linkage between a new downtown Riverside and the River and functioning as an anchor for new mixed use development and increased economic activity resulting in brownfield cleanup, blight mitigation and crime reduction.

As a public gathering space, the Park will provide a welcoming and safe environment, accessible and inviting to all ages and abilities.  Programs, amenities and passive recreational activities that promote healthy living through design and enhance the livability of the community can begin to address the social isolation and other health issues that may be revealed in the Community Participatory Public Health Survey, which is part of the planning process.

The RRAP and the Riverside Overlay District envision and provide ultimately for a continuous, approximately 1.6-mile Trail from the east side of Peconic Avenue, eastward to Town owned land on the north side of NYS RT – 24 at the easterly end of the Riverside Overlay District, encompassing the County parkland as well as Town and privately owned properties that make up the balance of the river front.

July 2018 – Contract between the Town and Araiys is executed

March 2018 - Town of Southampton issues an RFP for a consultant to prepare a concept plan for the construction of the Riverside Maritime Trail and associated passive recreational improvements on the County parkland; and for the wetland restoration of the shoreline pursuant to the NYS DEC Environmental Justice Grant.

Park Concept Design and Wetland Restoration - $43,000 allocated for the 14-acre County owned parkland on the south shore of the Peconic River at Riverside consistent with the Town / County Inter-Municipal Agreement.

Community Participatory Public Health Survey - $7,000 allocated for a secondary and parallel component of the Grant. This Health Survey will provide a status assessment of the Community health and inform future efforts to reduce risk to public health and improve the environment.

This grant program provides community-based organizations with funding for projects that address various environmental and public health concerns. The program has a particular focus on low-income and minority communities that have historically been burdened by environmental problems such as contaminated sites; water pollution; health problems and lack of green space and waterfront access.