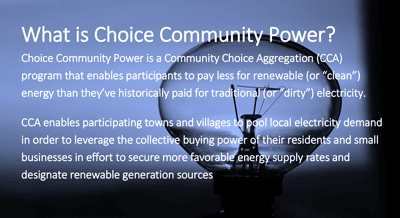 Community Choice Aggregation (CCA) is a Opt-Out program by which a town, or group of towns and incorporated villages, issue a competitive bid and choose an electricity supplier on behalf of the municipality’s residents and small businesses.  There are some exceptions. Time-of-Use customers, utility bill assistance program participants, and those who have selected an alternate supplier will NOT be automatically enrolled in Choice Community Power. In order to participate, they'll need to enroll. Additional exceptions are described in the FAQ section.

CCA aggregates the purchasing power of all the town's residents and small businesses, so lower electric rates can be negotiated. The savings can enable the entire community to switch to 100% clean and renewable electricity for less than what residents pay now.

CCA is a concept first implemented in Massachusetts about 20 years ago. It's been adopted by eight states, including New York in 2014. Sustainable Westchester launched the first CCA in New York State and saved ~$15M for 110,000 customers in aggregate over two years. The Westchester pilot now called Westchester Power provides electricity from 100% renewable sources for 25 of the 26 municipalities in the CCA Program.

While 100+ municipalities in New York State have taken the first step by passing a local law, there are five CCA programs in operation upstate and several others being developed.

When the program launches on Long Island, it will represent the first time Long Islanders will have ‘choice’ of electricity suppliers when it comes to. 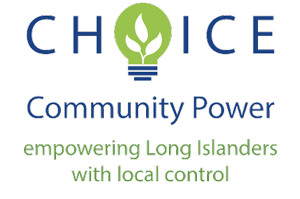 > What is choice?
> Are there any risks?